skip to main | skip to sidebar

There are Three Types of People...

Wii had a great time!

Well, it has been a while since Christmas but I wanted to share how wonderful our trip to California was. Since Jeff and I stayed in Utah last year it was California's turn this year. It also happened to be a special year because my Oma turned 90 in November. This meant that all of my family got to come home for Christmas and to celebrate my Oma (who is amazing and wonderful). By Christmas afternoon I had my parents, Oma, all of my brothers and sisters (and 2 sisters-in-love, as Ann likes to call them), and five neices and nephews. We also had my Mom's whole side of the family too. I think it was the first time we had all (the extended family) been together in quite a few years. Family was the best part of it all. 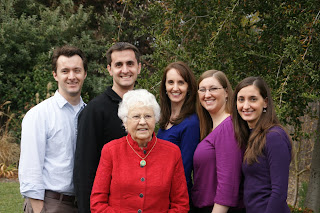 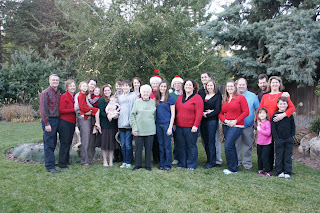 Now, onto the funny stories. My parents are VERY generous people and I love them so much. We had spent Christmas morning opening gifts from each other and watching the small ones enjoy the process of ripping up paper. Jeff and I picked up a rather heavy box from my parents and my mom calls over my dad to watch us open the box. Well, he comes over and picks up his camera. This is code for a special present. I couldn't think of anything that would surprise me so I was a little confused. Maybe it is a new something for the kitchen, I thought. Well, I started to peel back the paper and it took me a second for my brain to comprehend what I was seeing. 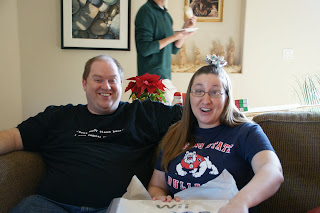 My parents bought us a Wii! I was in shock because that was the last thing I was expecting to see. Jeff and I had often thought about getting a Wii, but never got around to getting one. Lets just say the picture speaks for itself and there were lots of hugs of thanks that followed.
The other surprise of the day was a similar looking box that looked and sounded like it would be some kind of board game. I love board games and I had put a few of them on a wish list for this year, but the present had a tag that said I had to guess what was in the box. I had a hard time thinking, but then my mom started giving me clues. "It will remind you of your childhood" was the one that finally tipped me off. I shouted, "It's the BAD GAME!" 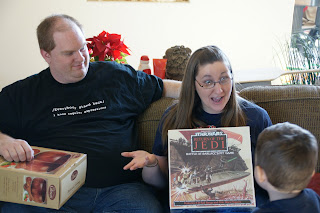 Now most of you are probably not familiar with the Bad Game. That is because that is not the real name. It is really Star Wars Return of the Jedi Battle at Sarlacc's Pit Game. As a small child I would want to play this game all the time with my dad (he is the only one who would play with me, and for good reason). I didn't know the name so I just called it the Bad Game and I didn't know how to play. I made up my own rules (different every time, I'm sure) and I magically always won. I still don't know how to play, but it will be fun to actually find out how to play, though I might have to invoke my own rules just to make sure I still win.
Well, like I said the presents were fun, but the best part was being home with my whole family and having Jeff get to see a little bit more of who I am and where I come from.
Anyone up for some Wii?

I'm up for some Wii. Oh wait, that's basically all we've done this weekend.

I want to play!

Glad you and Jeff had a great Christmas break! Does school start back up on Monday?

I'm glad all your family could be together for Christmas. I'm glad you shared the photos to document this special occasion!

I'm up for Wii! :) That is sooo exciting. I'm glad you had a fun Christmas with family!