skip to main | skip to sidebar

There are Three Types of People...

A celebration to remember! 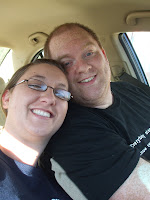 The trip we have all been waiting for finally happend! Jeff wisked me away on a secret anniversery weekend to celebrate our first year of marrige together. He has had his sneeky face on for quite a while and , as you might imagine, I was ready to find out what we were going to be doing.

We left at about 4pm on Friday and started driving south. This eliminated a few places and narrowed it down to about two options. We talked and laughed about what we had been doing a year ago while Jeff kept a tight lid on where we were going.

Finally, I was getting pretty hungry, so I asked if we were going to be eating soon or should I have some more snacks. He said it wouldn't be much longer which made me think. We started driving though Ceder City and was almost though the town when Jeff pulled off on the last exit. In my head I was thinking, "Hum, I have never been to Ceder City this will be new." I was excited and ready to begin the trip, and I was starving. Jeff had found an old Ma and Pop type steak house where all the locals were coming in and the workers asked where we were from. It was such a friendly place and the food was GOOD.

After dinner we were off to the place we would be staying. Jeff turned back the way we had come and then before I knew it we were back on the freeway. "What!?" "I never said we were staying in Ceder City," Jeff smirks to me. This is when I shout my guess, "We are going to Saint George! We are going to Tuacahnn!" Jeff told me that I was right and that we would be seeing one of my favorite plays, Aida.

Saturday was a bit of an adventure. First, I had told Jeff to find something that he wanted to do on the trip, so he chose to see a "boy movie". Well, it took us driving around for quite a while to finally find the movie theater, but we did find an AMAZING Mongolian BBQ by accident. That was some good food! 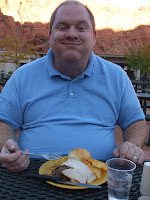 On Saturday night we drove out to Tuacahnn to eat at the buffet before the show started. We even had a little time to take pictures before going into the theater. Jeff was so wonderful to get tickets that were third row center! If you haven't been to Tuacahnn, the back of the stage is the mountain and it looks beautiful. As the show begins the backdrop is parcially covered, but as the song changes moods and the "war" begins the front pieces melt away and the people come out of the mountain and horses charge on stage! It was so crazy to see all of the special effects (fireworks, a camel, chickens, sheep, etc.). My favorite was the waterfall that slowly filled another pool and then created another waterfall. This happend about three times and each time it go closer and closer to the stage. I thought it would just run off somewhere off stage, but soon it actually created a river ON STAGE! It looked amazing and I think my jaw dropped. 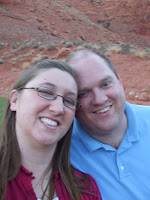 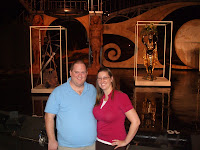 The next morning it was time to check out and go home. Sunday was our actual anniversery so we thought it would be a good idea to stop by the Saint George Temple on our way out of town to remind us of the special promises we made only a year ago. 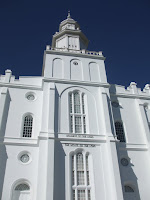 On the drive home there was more laughing about the events of last year (how I had to get up so much earlier then Jeff did!) and our favorite memories. We stopped in a park to each lunch, but then finished off the drive home. 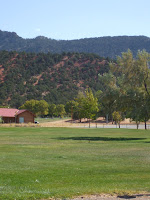 It was a wonderful weekend, but the best part was remembering how great the whole year has been. I look forward to an eternity of time with my love.

I'm glad you had lots of fun. Next year is all you! I'm excited to see what you come up with. :) I love you!

Happy Anniversary!! I love you guys so much. That trip sounds wonderful! Jeff is good with the surprises. Now I need to go see a show at Tuacahnn!

I'm so glad you posted. You know I've been waiting for 2 months, right? ;)

Happy Anniversary! I'm glad you guys had a good time :)

Happy late Anniversary!! (I already told you two on Sunday though, so I'm not late.) My friends saw Aida in St. George that same night! I love Aida. Glad you had a great 1st anniversary!

I'm glad you had such a good time!

So fun! You lucky ducks!

Sounds like a wonderful trip. It is nice when husbands plan nice surprises like that. Way to go Jeff!

Such a fun anniversary trip! I have never seen Aida. You are going to have to tell me all about it.

Jeff does dominate. And you two do a good job together. I'm glad that you are both still enjoying the adventure.